Design a site like this with WordPress.com
Get started
Skip to content
The Paradise Progressive Commentary, History, History and commentary May 22, 2019January 29, 2022 5 Minutes

The African-American neighborhood of Fort Myers in an undated photo.

Saturday, May 25th, will mark 95 years since two African-American teenagers were seized by a white mob and lynched in Fort Myers, Fla.

The anniversary comes amidst a rise in hatred and racism in the United States and serves as a stark reminder of where bigotry ultimately leads. It’s also a demonstration of what happens when the rule of law breaks down.

It can happen here—and it has.

It’s also worth remembering; history does not have to repeat.

This account draws from two sources: One is an article in The Fort Myers News-Press on the event’s 90th anniversary. That article, “Lynching history spurs call for closure, 90 years later” by reporter Janine Zeitlin, was published on May 21, 2014. The account drew on people’s recollections and the work of Nina Denson-Rogers, historian of the Lee County Black History Society, who pieced together fragmentary information on the incident.

The other is the original, unbylined article that appeared in the Fort Myers Press on May 26, 1924, headlined, “Negroes pay penalty for horrible crime committed yesterday.”  (Referred in this article as the “1924 account.” The article is posted in full below.)

According to Zeitlin, on Sunday, May 25, 1924 two black teenagers, R.J. Johnson, 14, and Milton Wilson, 15, (given as “Bubbers” Wilson and Milton Williams in the 1924 account) were spotted by a passerby swimming with two white girls on the outskirts of Fort Myers, then a segregated city of about 3,600 people. Lee County was home to about 15,000 people.

“The lynchings happened after R.J. and Milton went swimming at a pond with two white girls on the outskirts of town,” according to the Zeitlin article. “They were said to friends with the girls, maybe more. Perhaps they were skinny-dipping. There were rumors of rape, though one girl and her brother denied it.”

The two boys and girls lived near each other, were long familiar and played with each other as children, states Zeitlin. The swimming was reported by someone as a rape. The 1924 account simply states that the boys “attacked two young Fort Myers school girls.”

The black community first learned that something was amiss when evening church services were canceled. Just before sunset the rape report resulted in white residents on foot, horseback and in cars gathering at a white girl’s residence. From there they began invading black homes and yards in a search for the two boys.

During the evening, chaos spread through the city as the search continued. At one point a gas truck was driven into the black community with the intention of burning it down if the boys weren’t found.

At some point R.J. Johnson was found. According to the 1924 account, he was arrested by Sheriff J.E. Albritton and put in the county jail.

“Hearing of this the armed citizens went to the jail and demanded the prisoner. The request being lawfully refused by the sheriff, he was overpowered, the jail unlocked and the negro led out,” states the 1924 article.

In the Zeitlin account, Johnson was taken to a tree along Edison Avenue, hanged and shot. According to the 1924 account “his body was riddled with bullets and dragged through the streets to the Safety Hill section.”

The search then continued for Wilson, who was found at 4:46 am the next morning by a railroad foreman, hiding in a railroad box car on a northbound train. He was taken from the box car, hanged, castrated and shot multiple times. His body was then dragged down Cranford Avenue by a Model T.

“It was like a parade, some evil parade in Hell,” according to Mary Ware, a resident who was quoted in a 1976 article in the News-Press. The crowd broke up when the sheriff and a judge appeared. 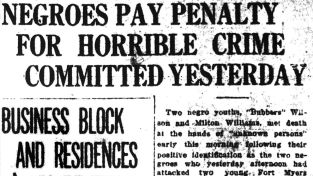 On Monday the afternoon edition of the Fort Myers News-Press was headlined “Negroes Pay Penalty for Horrible Crime Committed Yesterday.”

On the same day a jury convened and absolved the sheriff, attributing the lynchings to “parties unknown.”

“That the rape had taken place, the black community definitely felt never occurred, that it was prefabricated by this white man who came across them swimming,” said resident Jacob Johnson in a late 1990s interview with the Lee County Black History Society, quoted by Zeitlin. “Everyone felt … these boys had just been killed for no reason, other than they were there with these white girls.”

As stated at the outset, this is where racism and bigotry lead.

But it’s also a lesson in the need for the rule of law. The two accused teenagers were never able to assert or prove their innocence, were presumed guilty from the outset, were never granted a public trial and were punished according to the whims of the mob, all violations of basic personal, legal and constitutional protections.

As the rule of law is eroded in this country, flouted from the president on down, every American loses the protections that law provides. The result can be something like the 1924 Fort Myers lynchings—and can lead to the deaths of innocents.

And as for false accusations and mistaken impressions leading to dangerous consequences, those are with us too.

The Sunday before last, on May 12, at the Off-the-Hook comedy club in Naples, Fla., when comedian Ahmed Ahmed made a joke about organizing a terrorist group with the Middle Easterners in the audience, a patron called 9-1-1 to report a possible terrorist incident.

Because of a joke. By a comedian. In a comedy club.

Below is the full text, with original capitalization and usage, of the article on the Fort Myers lynching as published on the front page of The Fort Myers Press, on May 26, 1924:

Within a few hours after word of the happening had reached town a systematic search was started independent of the efforts of Sheriff J.E. Albritton who with his force was on the job immediately upon hearing of the crime.

A general round up of suspicious characters by the sheriff’s office netted Wilson, who was lodged in the county jail.

Hearing of this the armed citizens went to the jail and demanded the prisoner. The request being lawfully refused by the sheriff, he was overpowered, the jail unlocked and the negro led out.

Taken before one of the girls he was identified by her and then taken away where he confessed to his captors, following which his body was riddled with bullets and dragged through the streets to the Safety Hill section.

The search for his accomplice was then carried out with increased vigor, all outlets from the city being carefully guarded. The hunted man was located about 4:46 a.m., on a north-bound train pulling out of the railroad yards. Following his positive identification, he met the same fate as the first negro.

Charged with ascertaining by what means the two negroes met their deaths, the jurors reported as follows: “the said “Bubbers” Wilson and Wilton Williams came to their death in the following manner, to-wit:

By the hands of parties unknown, and we herewith wish to commend the Sheriff and his entire force for the earnest efforts made by them, in their attempt to carry out the duties of their office.”