Design a site like this with WordPress.com
Get started
Skip to content
The Paradise Progressive Analysis and commentary January 20, 2020 4 Minutes 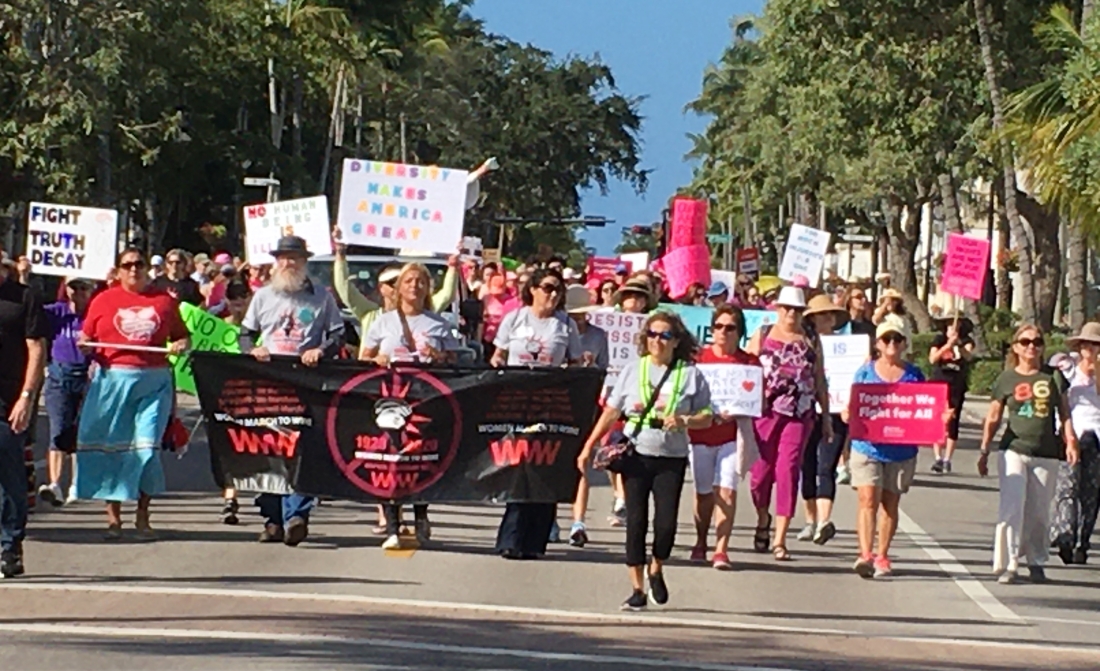 Today, marchers in Naples and Fort Myers will commemorate the life and legacy of Rev. Martin Luther King Jr. (MLK). This past Saturday, Jan. 18, activists marched in support of democratic values, liberal causes and to protest the Trump administration’s corruption and assault on women and their concerns.

Saturday’s Women’s March to Win in Naples and the march in Fort Myers were vigorous, enthusiastic and exuberant. The same spirit will likely pervade today’s marches.

But do such marches and demonstrations make a difference, especially in broadly conservative and predominantly Republican Southwest Florida?

The ultimate results won’t be known until the election in November. However, the robust turnouts for the women’s marches demonstrated that liberal political activism in Southwest Florida is alive, well and energetic—and poised to make a difference in both election results and people’s attitudes.

Organizers of the Naples march, formally titled Women March to Win, included Collier Freedom, the Collier County Democratic Party and its Environmental Caucus, SWFL Justice for All, Showing Up for Racial Justice, and Collier Students for Change. The Fort Myers march was hosted by the Alliance and Women’s March Fort Myers, a 501c3 non-profit organization.

The Naples March was significant in that it was the first time since the marches began in 2017 that organizers received a permit to use the street rather than just the sidewalks. Marchers started and ended in Cambier Park.

Both local marches were part of demonstrations that took place around the country. 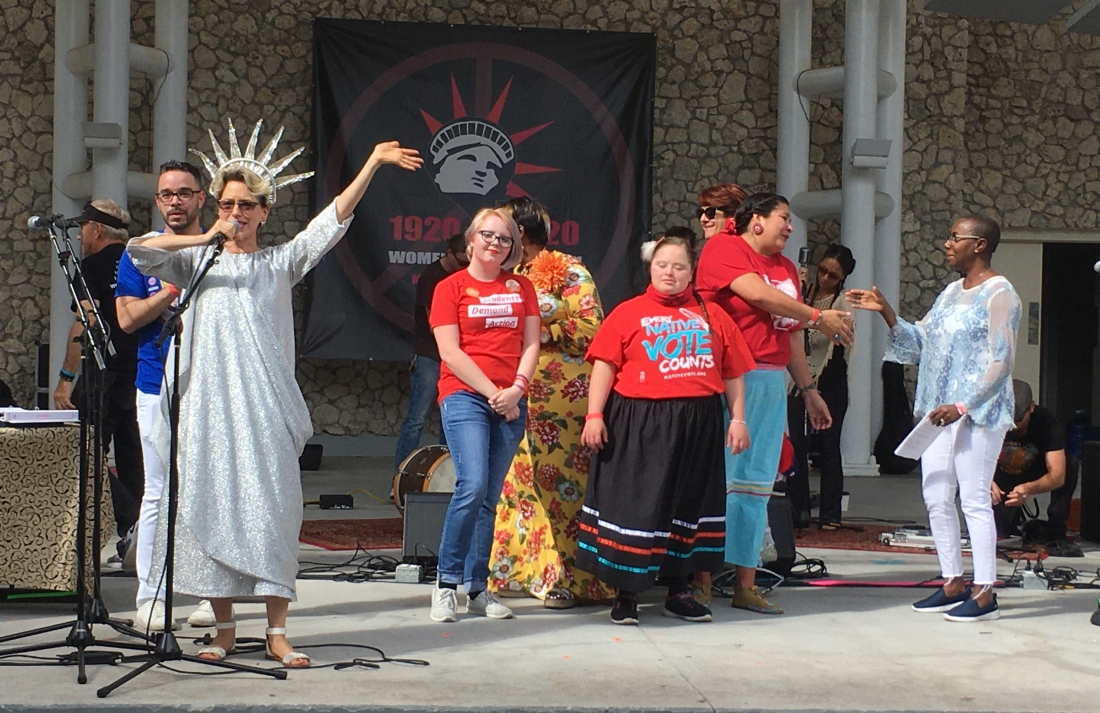 This year’s Women’s Marches commemorated the 100th anniversary of women’s suffrage and in a more recent context, the outpouring of protest in 2017 against President Donald Trump’s racism, bigotry and misogyny.

The MLK parades celebrate MLK’s commitment to non-violence, peaceful resistance and his efforts to achieve equality, fairness and justice.

So such parades and demonstrations serve the purpose of passing on a legacy to the next generation, honoring the struggles that have gone before and remembering the values that powered the movements.

A show of strength 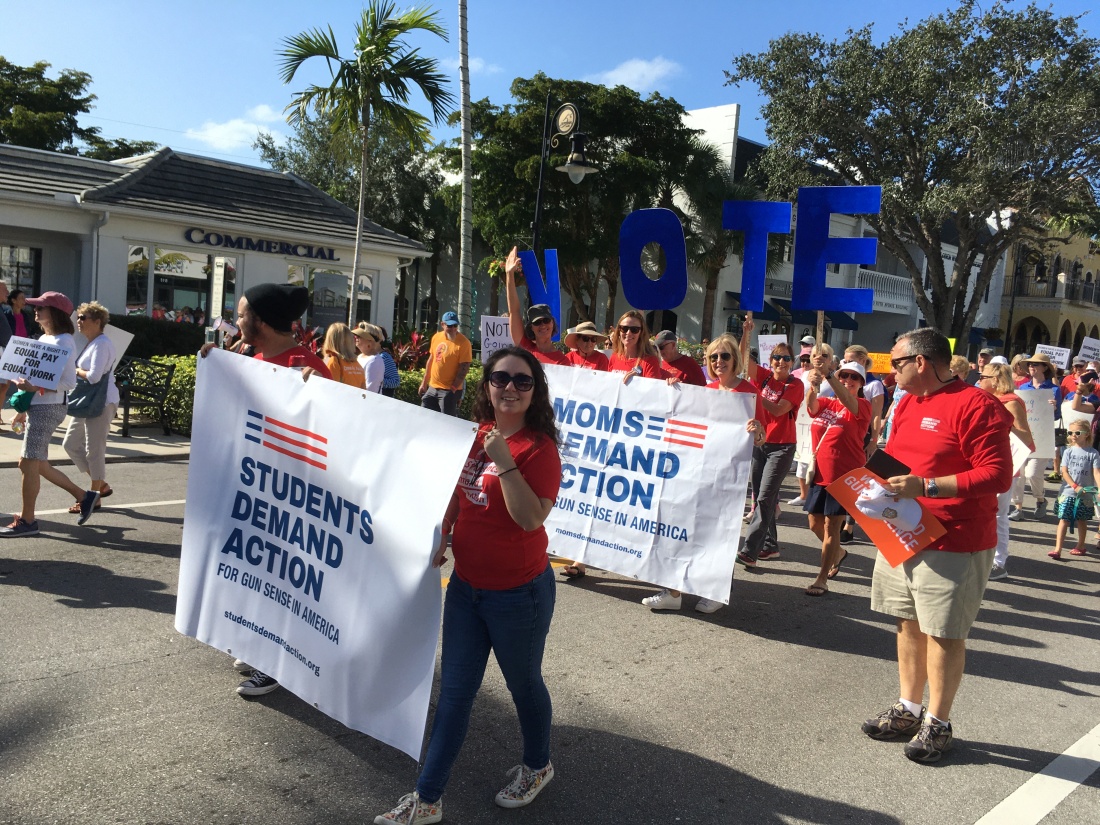 Some of the groups hosting the Women’s March in Naples.

Turnout at demonstrations is always a measure of the strength of a movement and the broadness of its appeal.

In 2017, an estimated half million people turned out in Washington, DC for the first Women’s March, vastly eclipsing Trump’s paltry inauguration crowds. In Naples, 2017 turnout was unexpectedly large, with several thousand people filling Cambier Park and surrounding streets. It was especially surprising in light of Naples’ seeming somnolence, its apparent conservatism and its reputed indifference to politics. Organizers had expected a crowd of around 500 people; ultimate participation was orders of magnitude larger.

This year, an estimated 3.000 people participated in Naples based on a count of wrist bands provided by March organizers in an effort to get an accurate tally. The count may actually be higher, according to Cynthia Morino-Clark, a March organizer, since not all volunteers attending the march received wristbands. In Fort Myers, WINK News estimated that over 2,000 people marched from the Alliance for the Arts to Centennial Park.

In addition to their other purposes, demonstrations of this type also forge solidarity among demonstrators. Particularly in Southwest Florida where liberal activists may often feel that they’re struggling in isolation, demonstrations are an expression of common purpose and wider support. 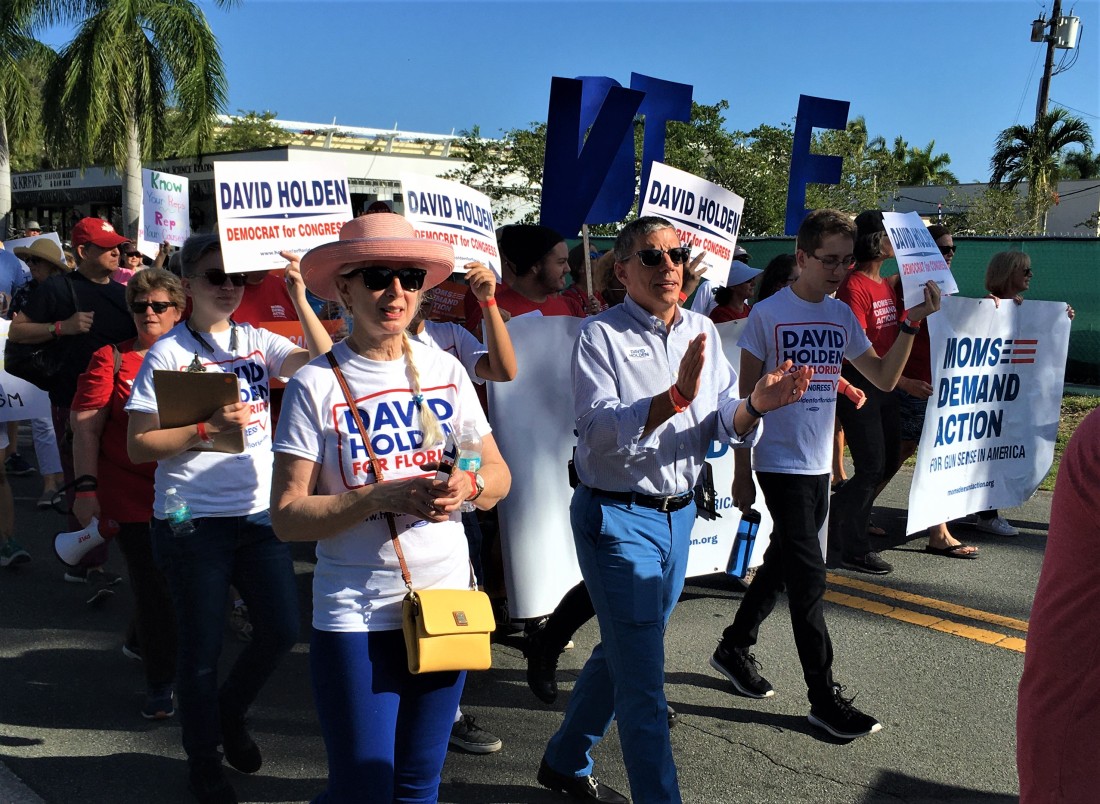 Parades, marches and demonstrations are always an opportunity for electoral candidates to show support for the cause and greet people.

Democratic candidates for office appeared at both Women’s Marches this year: congressional candidates David Holden in Naples and Cindy Banyai in Fort Myers; Sara McFadden and Maureen Porras for state legislature in Naples and John Jenkins, a candidate for Collier County Commission.

Voter turnout was a major theme of the Women’s Marches, which featured exhortations to vote and voter registration opportunities during the rallies.

Conversely, the Women’s Marches were also an opportunity to protest against Trump administration policies and prejudice.

That sentiment wasn’t universally shared. A Trump provocateur inserted himself at the head of the Naples parade, although he was later separated by police from the main body of the march. He then posted himself outside Cambier Park. He has appeared to disrupt other events in the past, like gatherings of Marjory Stoneman Douglas High School survivors. Asked his name, he replied “Donald Trump Jr.” 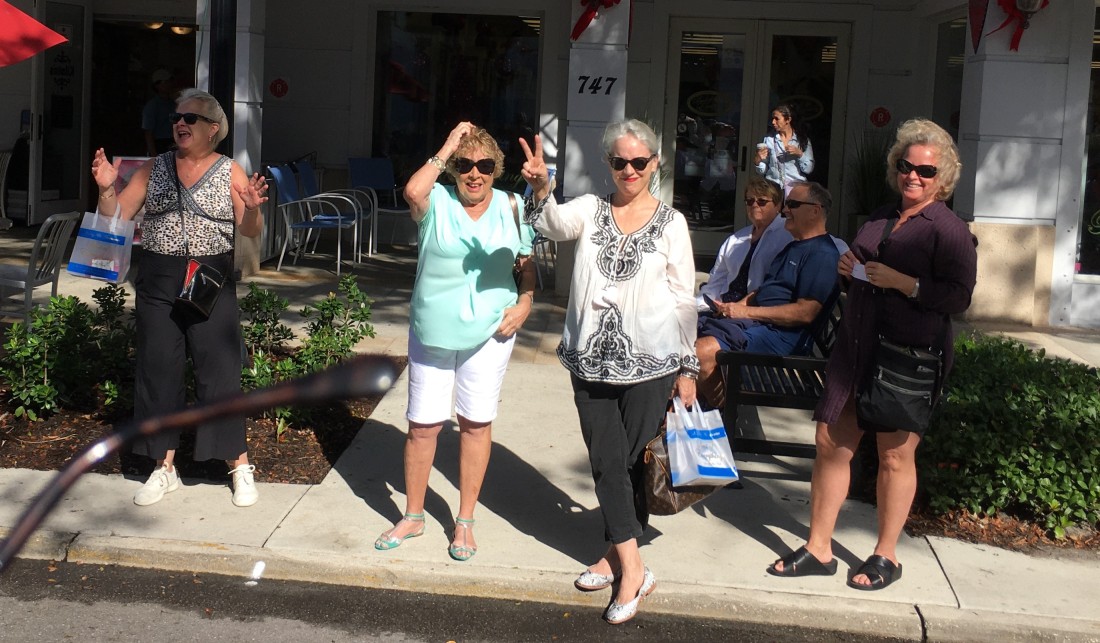 Spectators at the Naples Women’s March show their support.

Demonstrations, marches and parades help spread a message. Though spectators were sparse at the Women’s March in Naples, the march did elicit spontaneous support from observers.

Coverage of the march by local traditional media was erratic. WINK-TV reported both marches with extended coverage. The Naples Daily News covered it with photos on page three the following day. NBC-2 television news did not mention a single word about the march in its 6:00 pm broadcast that night and only posted a short story prior to the march on its website.

The MLK Parade, since it is scheduled annually and is a more formally organized event, should receive at least some coverage in all Southwest Florida’s media outlets.

The usefulness of events 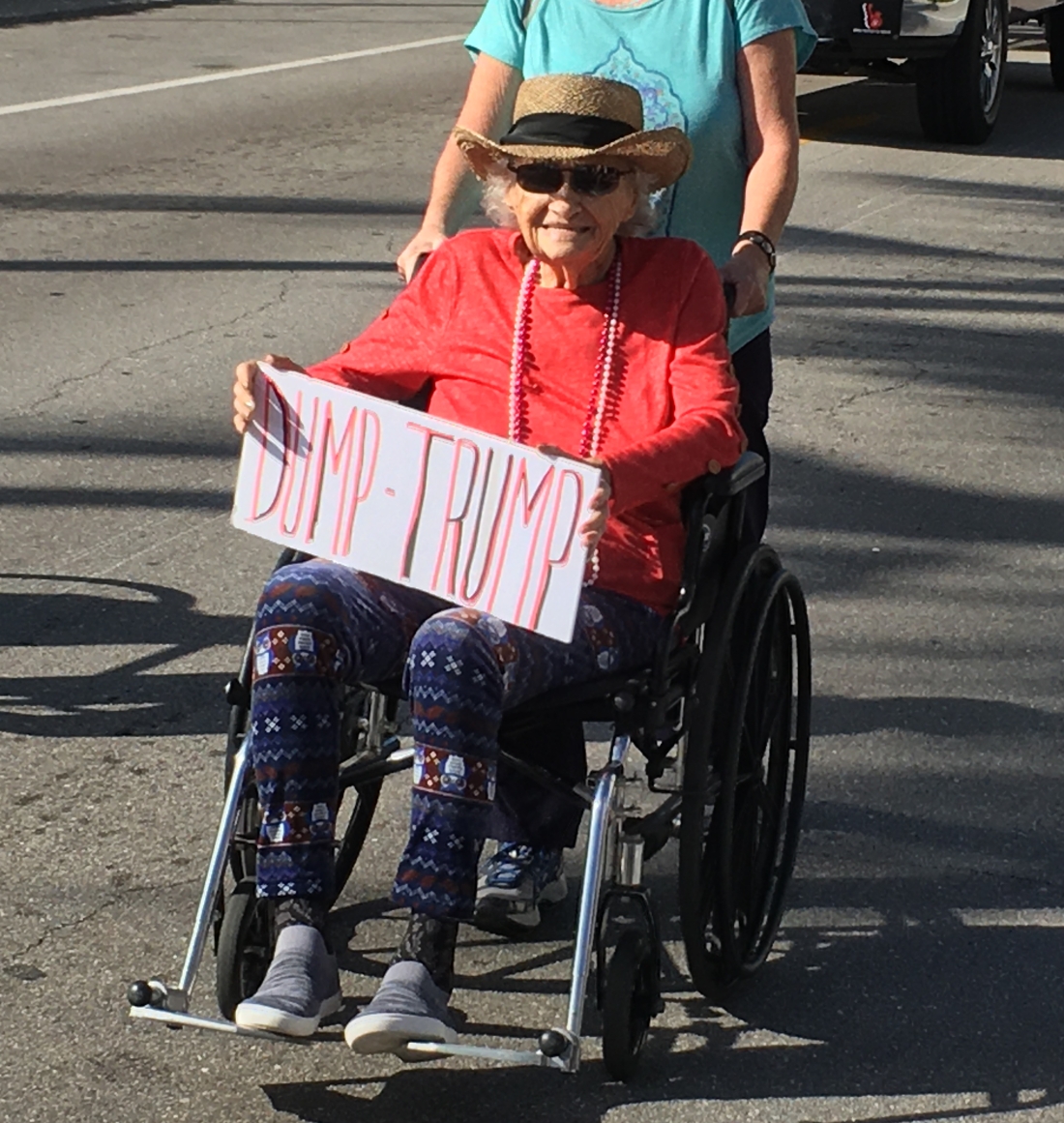 The United States Constitution guarantees its citizens the right to peacefully assemble and petition government for a redress of grievances. As long as those rights remain inviolate, demonstrations, marches and protests will occur.

Demonstrations can make a difference—and in a place like Southwest Florida, where a single party dominates all government, they are particularly important as an expression of popular sentiment and peaceful dissent.