Another day, another tariff and more pocketbook pain for the everyday people who play by the rules and pay their taxes.

This time it’s a 5 percent tariff on all Mexican goods that President Donald Trump is threatening to impose. He announced last Thursday, May 30, that the tariff would go into effect one week from today, on June 10. After that it’s 10 percent on July 1, 15 percent on Aug. 1, 20 percent on Sept. 1 and 25 percent on Oct. 1, after which the 25 percent rate becomes permanent.

The tariffs are intended to force Mexico to stop the movement of Central American migrants to the US border.

As was the case when he last threatened to close the U.S.-Mexican border, Trump may be lashing out at Mexicans and Central American migrants but it’s everyday Americans who will feel the lash.

Prices for everything are going to rise if this latest tariff goes into effect. Tariffs both disrupt international trading relations and serve as an effective tax on the American consumer.

This is the case for Southwest Florida as much as the rest of the country—and indeed, while much of the focus on the tariffs’ impact has been on the states directly adjacent to the southwestern border like California and Texas, Florida has a flourishing trade with the neighbor to the south that stands to take a big hit.

Florida’s trade with Mexico is substantial. In 2018 imports and exports of merchandise were worth $6.8 billion, according to Enterprise Florida, the state’s economic development organization. Top Florida exports to Mexico included civilian aircraft, engines and parts; pleasure boats and yachts; and cars. Top imports from Mexico included cars, trucks and gold. Mexico is the third largest export market for Florida companies after Brazil and Canada. 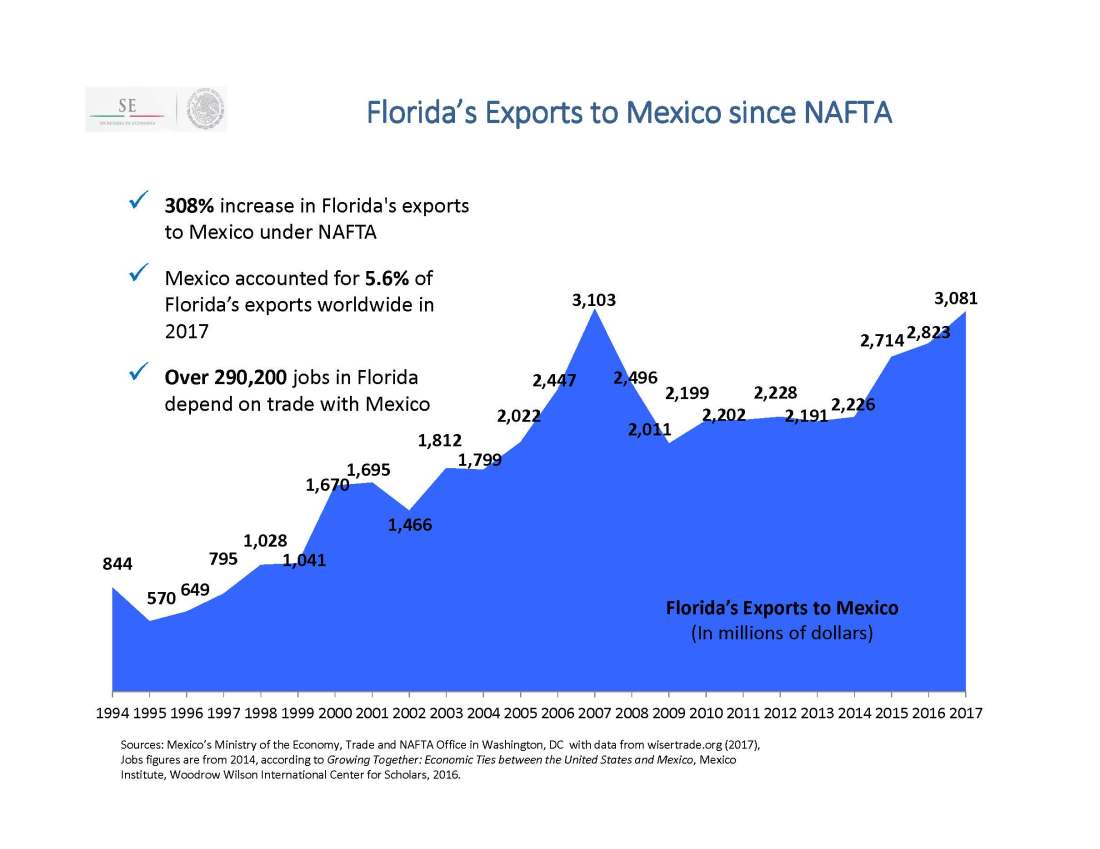 Also, Mexicans have been investing in Florida real estate, particularly in the southern part of the state, according to the RealWealth Network.

As with all his tariffs, a chorus of voices, including many who are traditionally conservative, are speaking out against this latest round of unnecessary trade measures.

One of the most surprising critics was Sen. Chuck Grassley (R-Iowa), a normally staunch conservative and chairman of the powerful Senate Finance Committee. “Trade policy and border security are separate issues. This is a misuse of presidential tariff authority and counter to congressional intent,” Grassley declared in a May 30 statement. “I support nearly every one of President Trump’s immigration policies, but this is not one of them. I urge the president to consider other options.”

Lawmakers, experts and officials are also worried that Trump’s arbitrary tariff imposition will threaten negotiation of the US Mexico Canada Agreement, the successor to the North American Free Trade Agreement, which Trump trumpeted as a vast improvement to its predecessor.

As with all tariffs, it’s consumers—in Southwest Florida and around the nation—who will suffer as prices rise. From fruits, nuts and vegetables to beer and tequila, to home appliances and cars, the cost of all Mexican imports will rise.

Fun interactive activity: Check the “Made in” labels of home appliances like washers and dryers and see how many are made in Mexico.

“Duties are harmful to the American consumers,” Lance Jungmeyer, president of the Fresh Produce Association of the Americas, told NPR. “It’s a tax on consumers. And that’s the wrong way to go with fruits and vegetables.”

Tomatoes are likely to be the first product that Trump’s tariffs will squeeze in the shopping cart. Florida tomato growers had been pushing for restrictions on Mexican tomatoes for some time, as riper Mexican tomatoes grabbed a larger share of the market. Now the growers may get their wish—but it’s everyday shoppers who will get juiced.