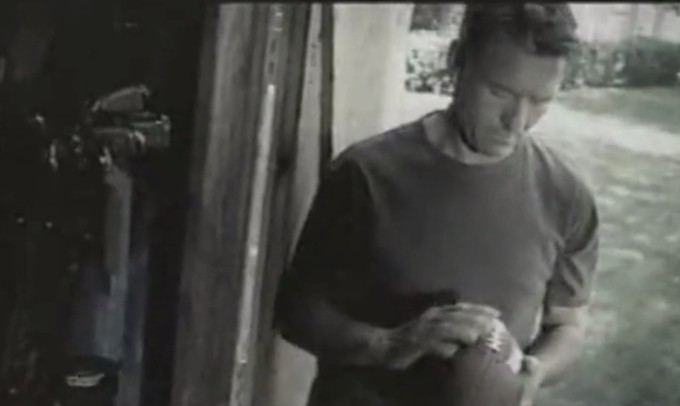 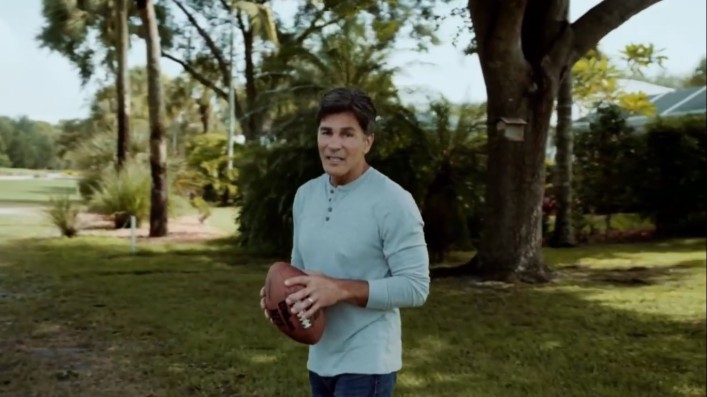 Blasts from the past and present: Levitra Man and William Figlesthaler.    (Images: You Tube, Figlesthaler for Congress)

We’re going into the home stretch before the primary on Aug. 18. Voting starts on Aug. 8 and people are already casting mail-in ballots.

As a result, the campaigning is getting harder, the attacks getting sharper and the ads are becoming more negative. With traditional face-to-face campaign tools like rallies, door-to-door canvassing and meet-and-greets unavailable due to the pandemic, this year’s election really rides on television advertising.

So while everyone can see the ads—in fact, they’re impossible to avoid in the 5 pm to 6:30 local news hours no matter how hard one tries—what are the dynamics behind them? Why are particular candidates using particular arguments and images? Why are they attacking particular opponents? Are the campaigns succeeding in their goals?

And don’t forget: This article only covers the Republican rumble in the 19th Congressional District. There are good Democratic alternatives in every race.

Who would have thought that state Rep. Byron Donalds (R-80-Immokalee) would emerge as a major player—or threaten the richest candidate, businessman Casey Askar?

(The Paradise Progressive will be doing individual analyses of candidate’s financial reports in future articles.)

But Donalds’ campaign fundraising and totals don’t tell the whole story. He has a not-so-secret weapon: an endorsement and support from the Club for Growth Action, a Super Political Action Committee (PAC). Super PACs can spend unlimited amounts of money on behalf of a cause or candidate as long as they don’t coordinate with the candidate’s campaign.

Club for Growth is not just any old conservative political organization. It touts itself as “the leading free-enterprise advocacy group in the nation, we win tough battles and we have an enormous influence on economic policy.”

In a 2016 Politico Magazine article, author Simon Van Zuylen-Wood characterized it as a “deep-pocketed interest group that is feared by Republicans who come into its cross hairs for supporting tax or spending hikes.” It claims membership of “250,000 pro-growth, limited government Americans who share in the belief that prosperity and opportunity come from economic freedom.”

No surprise, Democrats are not enchanted. “The Club For Growth has done an absolutely terrific job pushing reckless and extreme Republicans through primaries, thinning out an already out of touch and cash-strapped class of Republican recruits,” Robyn Patterson, a spokeswoman for the Democratic Congressional Campaign Committee, told The Hill.

Club for Growth Action is the Club’s spending arm and this year it chose to endorse and spend on behalf of Byron Donalds, the only Florida candidate and the only African American of the 49 candidates it is supporting.

Club for Growth Action’s intervention is what in military terms is called a “force multiplier.” It suddenly makes Donalds one of the best financed, if not the best financed candidate, in the race. Now, not only is he running his own ads touting his allegiance to Trump and his conservatism, he has outside ads backing him up, putting him on a par with the until-now richest candidate, Casey Askar.

Pretty clearly Askar—and/or his staff and consultants—are painfully aware of it too, because they’ve suddenly decided to go after Donalds with negative TV ads. To do this, they’ve focused on Donalds’ and the Club for Growth’s Achilles heel.

In a Republican primary race built on fanatical fealty to Donald Trump that allows no room for deviation or impurity, Club for Growth has a dark past: In 2016 it opposed Donald Trump. “There’s nothing conservative about Donald Trump,” one of its operatives stated at the time.

And what is Byron Donalds’ sin? His 1997 drug bust, which he himself acknowledges in his campaign video? An admitted acceptance of a bribe in 2000? Nah, that’s just water under the bridge. His real crime is political heresy, which the Askar opposition team uncovered: In the past, Byron Donalds didn’t support Trump! In fact, he thought Trump was something of a jerk and said so. Imagine! Impure thoughts!

In a television ad approved by Askar, he brings up Donalds’ past opposition to Trump and Donalds’ tweets disparaging Trump and expressing relief when Trump announced in 2011 that he wouldn’t be running.

A lengthier and more explicit video was issued by another Super PAC, Honesty America PAC, which identifies itself only as “conservative voters, frustrated with politicians who promote themselves and their ‘public service’ with no regard for the truth”—no names, no further identity on its website, and with a Twitter account that only activated in March. A search of FEC records reveals Honesty America Inc., a Super PAC based in Alexandria, Va., incorporated on April Fool’s Day, 2020 with David Satterfield, a professional campaign compliance consultant, as its treasurer. 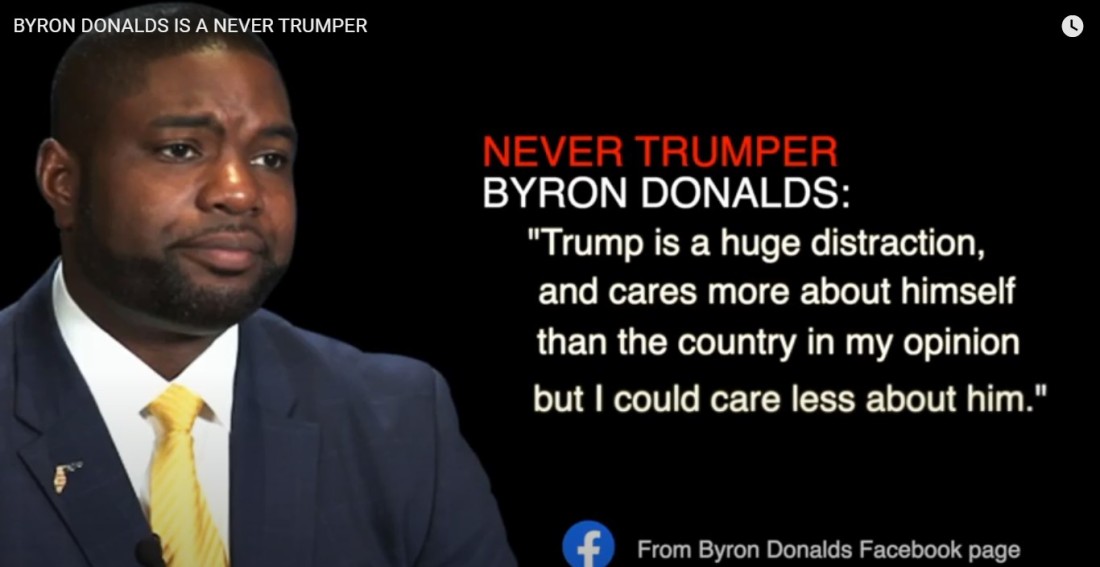 Byron Donalds has responded with a video of his own called “Dishonest attacks by Casey Askar.”

In the video, Donalds says: “My opponent, Casey Askar has decided to attack me, not on my conservative record, which started here in Southwest Florida with the Tea Party movement and he’s not attacking me on my conservative record in the Florida legislature, where I have stood up even to my own party to protect your constitutional Second Amendment rights.” He then goes on to rebut the attacks, attributing them to youth or to his existence in the days prior to Trump’s time as a politician.

Askar himself is not immune to criticism and worse. An FEC complaint has been filed about the source of his $3 million loan to his campaign and a complaint to the state’s attorney charged that his Harvard Business School degree was bogus, a charge Askar is fighting with a lawsuit. But aside from these public attacks, a variety of campaign operatives of unknown provenance and motivation are peddling information about Askar behind the scenes. (For more, see “Sleaze, slime and slander: Southwest Florida’s summer in the swamp.”)

To a skeptical outsider, the charges and countercharges sound like a metaphysical argument among Inquisition judges over who should be burned at the stake. But in the real world, the heat is rising because the candidates are fighting over a shrinking share of undecided Republican voters who will determine the primary winner.

However, given the rising passion, politics and friction, both Askar and Donalds may spontaneously combust well before August 18.

In his campaign ads Dr. William Figlesthaler has played different roles: He’s been the angry Dr. Zhivago populist in a white lab coat. He’s been the Knight Trumplar on his iron steed, doing battle with the goblins of the left. He’s been the Grim Reaper stalking down corridors like a crazed Jack Torrance in The Shining.

But viewers knew something had changed when he shaved off his signature five o’clock shadow and stopped snarling at the camera.

In his first post-shave video, “A Legacy of Success,” issued on July 7, Figlesthaler touted his past successes in a way strongly reminiscent of Askar’s ads. He even tried to smile. Still, it was strange seeing him shorn and in the end his face seemed flat and featureless, like a botoxed balloon. (Bad lighting on that last shot, guys!)

In his latest video, Figlesthaler tries to be…human. It’s called “Just a Regular Guy.” After all his larger-than-life personas in his previous ads, this time he’s just a salt of the earth papa.

In the video he throws around a football in a field with a young boy—presumably his grandson—and he tells viewers he’s just a regular guy like everyone else.

The ad seemed eerily familiar to this viewer. Where had this scenario appeared before?

Does anyone remember back to 2003 and an ad for a drug called Levitra?

In that TV spot a middle-aged man enters a garage and sees an old football. He picks it up, goes in the backyard and throws it, trying to send it through the center of a tire hanging from a tree. At first he misses.

The narrator intones: “Sometimes you need a little help staying in the game.” The name of Levitra, a male enhancement drug, pops up. The ad, until then in black and white, suddenly goes to color.

His wife (presumably?) comes to the door and sees him active and energetic. She joins him in the backyard. They’re happy, snuggly and kissy-faced. 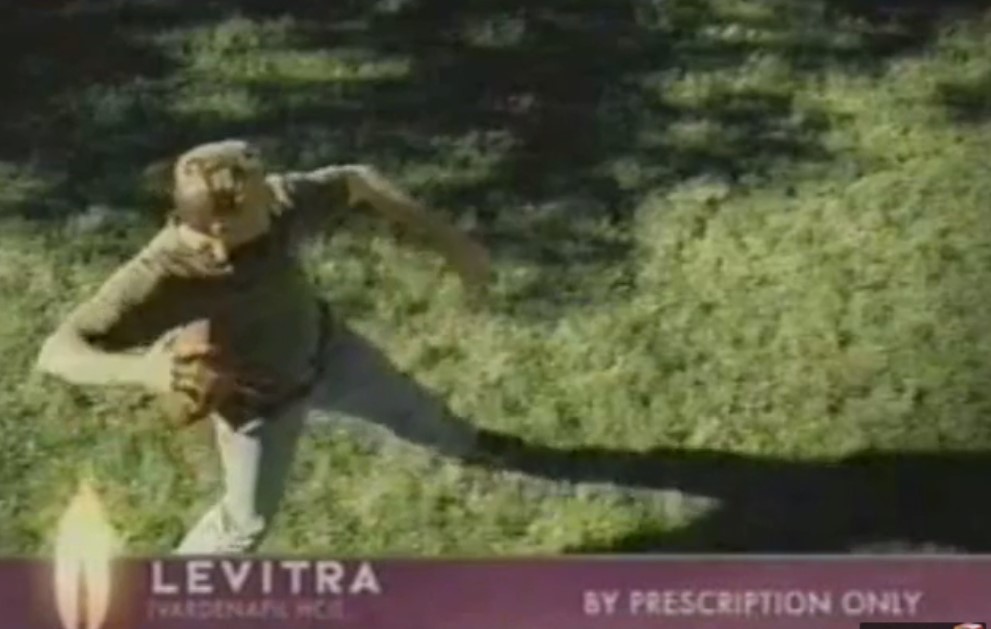 On the one hand the similarities between Figlesthaler’s ad and the Levitra ad (“Staying in the Game,” its proper title) might have been inadvertent. Perhaps his video production company is staffed by people too young to remember Levitra Man.

But “Just a Regular Guy” comes at a time when Figlesthaler’s campaign is being blasted as nothing more than a mid-life crisis on the website Freaky Fig, posted by…wait for it…Honesty America PAC, the same one attacking Byron Donalds to the advantage of Casey Askar.

Figlesthaler has pledged to keep fighting to the bitter end in the video “Everything I’ve Got.” He’s certainly staying in the game—financially.

Not to abandon objectivity or favor any particular campaign here, but maybe Figlesthaler would benefit from addressing genuine policy issues and the real legislative needs of Southwest Florida? He is, after all, running for the United States Congress. But understanding those would take work.

Meanwhile, as of today, there are 32 days until Primary Day.

And remember: There are Democrats to vote for in November.